Renzo Piano, most noted for his design of the London Shard, The Centre Pompidou and the New York Times building, has finished his latest work: the Academy Museum of Motion Pictures.

This winner of the Pritzker prize, the “architectural Nobel prize” according to many, has yet again astounded us. In this new project, Piano renovated an old 1930’s building and added a spherical structure, combining the two buildings to finalise the museum. REnzo describes his newest masterpiece as a “ love story between the older lady there, the May Co. building […] and the young flying vessel landing here”. This creation is evocative in every aspect of Pianos’ defining style of melding and incorporating older architecture with hyper modern installations.

The now Saban Building, formerly known as the May Company building,  the renovated 1930’s structure, named after Cheryl and Haim Saban who donated $50 million for the project, has been refurbished with limestone and gold leaf tiles. The facade of the structure presents an upright golden cylinder, stuck to the corner of the building, with an entrance at its base. 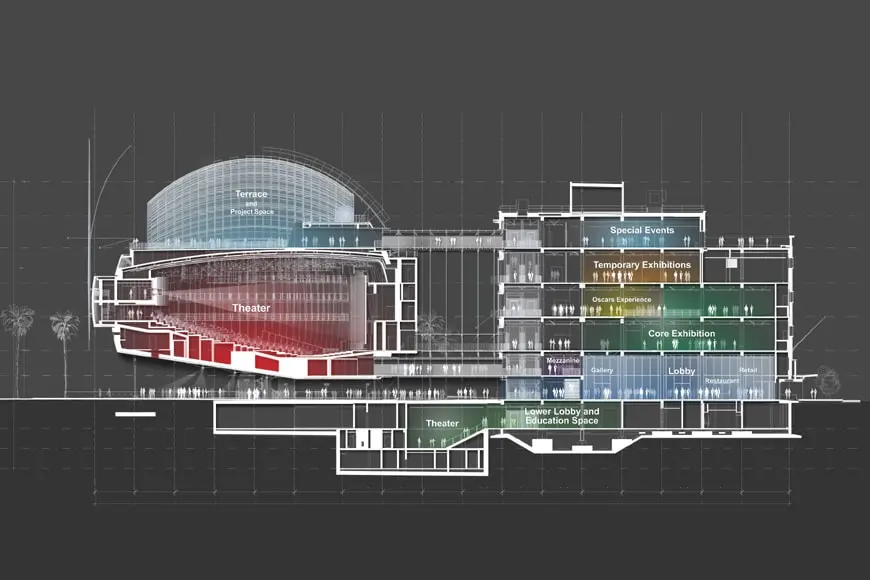 The Saban building has five storeys: On opening day, the ground floor has two things to offer: The Marilyn and Jeffrey Katzenberg Gallery and the Spielberg Family Gallery. The floors above hold the core exhibition, a story specifically for oscars, a temporary exhibition and a level dedicated to special events.

The added half of the museum, which has a base of concrete and steel built up into a sphere of glass, is dedicated to film in and out. It’s 1,500 glass shingles cut into 146 different shapes and sizes by fabricators in Austria, come together in a unique way to form this novel educational institution. The new structure comprises the Geffen Theatre and a terrace above it: a supposed project area. The terrace itself presents the glass dome with all its individual tiles.

The International School of Los Angeles is a non-profit, independent, international school committed to bilingual education and academic excellence in a nurturing environment. Our mission is to develop bilingual critical thinkers who are open-minded, confident and caring, and equipped to thrive in a diverse, competitive world.